Credit rating agencies have historically failed to anticipate the public debt crises in rich countries. This Wikirating blog article describes how Moody’s sovereign rating methodology has been modified in the aftermath of the Eurozone crisis. It also runs back-tests to estimate what its ratings would have been under this new risk assessment regime: Greece’s and Iceland’s ratings would have been much lower.

Credit rating agencies (CRAs) failed to anticipate the Icelandic banking collapse and the Eurozone debt crisis. These failures were especially harmful because the countries affected – rated in the single-A, double-A, or triple-A category at the dawn of the Great Recession – endured huge downgrades, which amplified the sovereign debt crisis. In fact, the Eurozone crisis has served as a reminder that even high-income countries can default. Gaillard (2014b) shows that this episode led Moody’s to update its methodology and assign more conservative ratings to European countries.

Even rich countries can default

Table 1 gives details on the 12 rich countries that have defaulted on their foreign currency (FC) debt since the first sovereign ratings appeared in 1918. Seven of the eight defaulting sovereign debt issuers that were assigned a credit rating were ranked in the investment-grade category three years prior to their bankruptcy. The excessively optimistic opinion expressed about Greece until 2010 convinced Moody’s to redraft its methodology in the same manner as it had created a sovereign risk unit in 1985 after giving top credit rating to defaulting Venezuela in the early 1980s (Gaillard 2011). 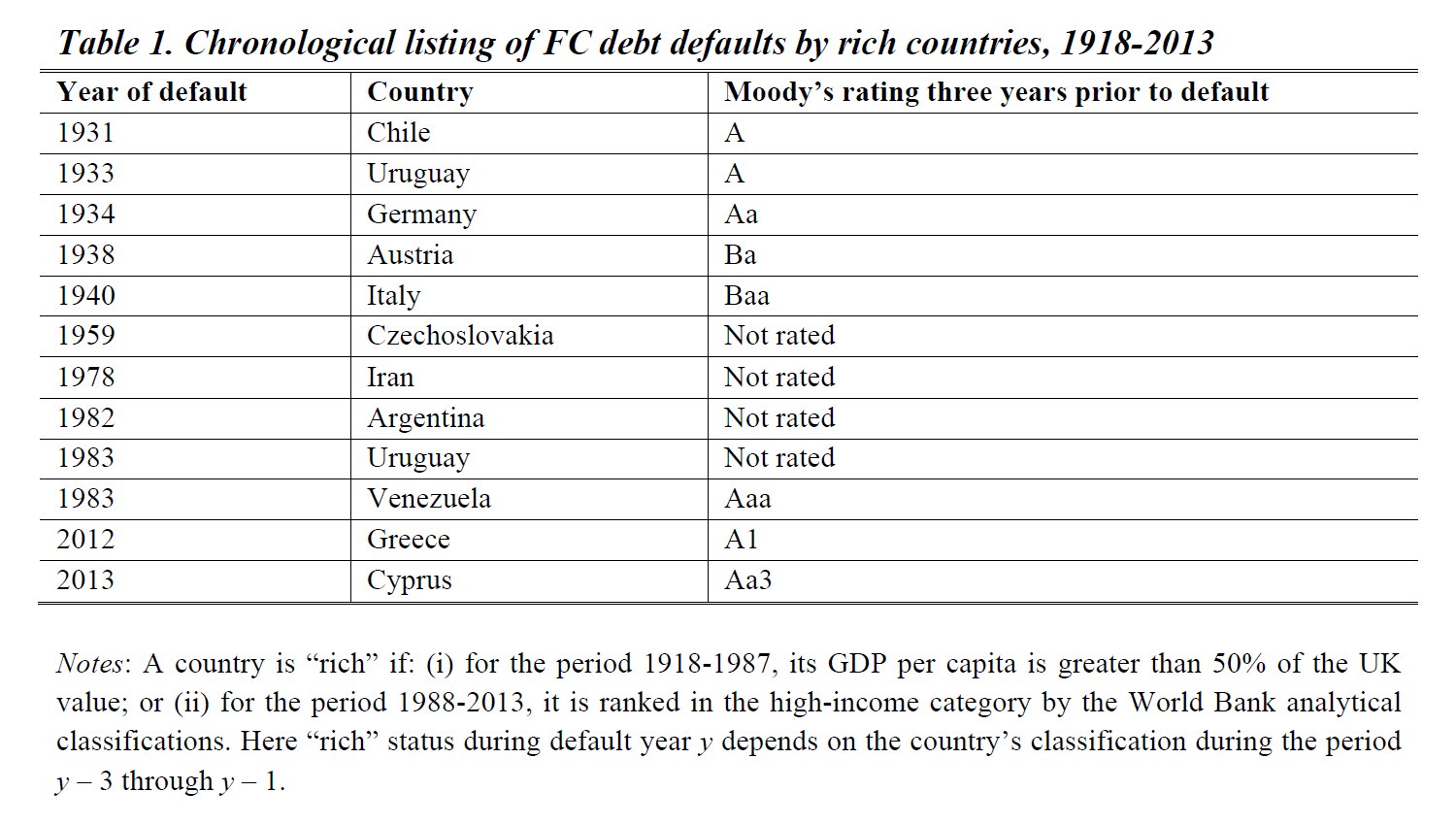 An updated sovereign rating methodology: The case of Moody’s

Moody’s (2013) updated methodology is based on four broad rating factors: a country’s economic, institutional, and fiscal strengths as well as its susceptibility to event risk. Each of these factors consists of several subfactors (see Table 2). After estimating or calculating each subfactor, the outcomes for each indicator are mapped to one of 15 ranking categories: very high plus (VH+), very high (VH), very high minus (VH–), high plus (H+), high (H), high minus (H–), medium plus (M+), medium (M), medium minus (M–), low plus (L+), low (L), low minus (L–), very low plus (VL+), very low (VL), and very low minus (VL–). The move from one ranking category to another is contingent upon precise thresholds stipulated by Moody’s. These mappings are used to determine the score for the subfactors and also for the broader rating factors.

Next, Factors 1 and 2 (economic and institutional strengths) are combined with equal weight to yield the economic resiliency factor. The combination of this new factor with Factor 3 (fiscal strength) yields an assessment of the government’s financial strength, which is finally combined with Factor 4 (susceptibility to event risk) to obtain an indicative FC credit rating. It is worth noting that Factor 4 follows a maximum function. Moody’s explains that, “as soon as one area of risk warrants an assessment of elevated risk, the country’s overall susceptibility to event risk is scored at that specific, elevated level.” This approach is innovative in that – unlike previous methodologies – it does not rely exclusively on a weighting system. The meticulous nature of Moody’s methodology makes it easier to run back-tests and to estimate what its sovereign ratings would have been under this new risk assessment regime. 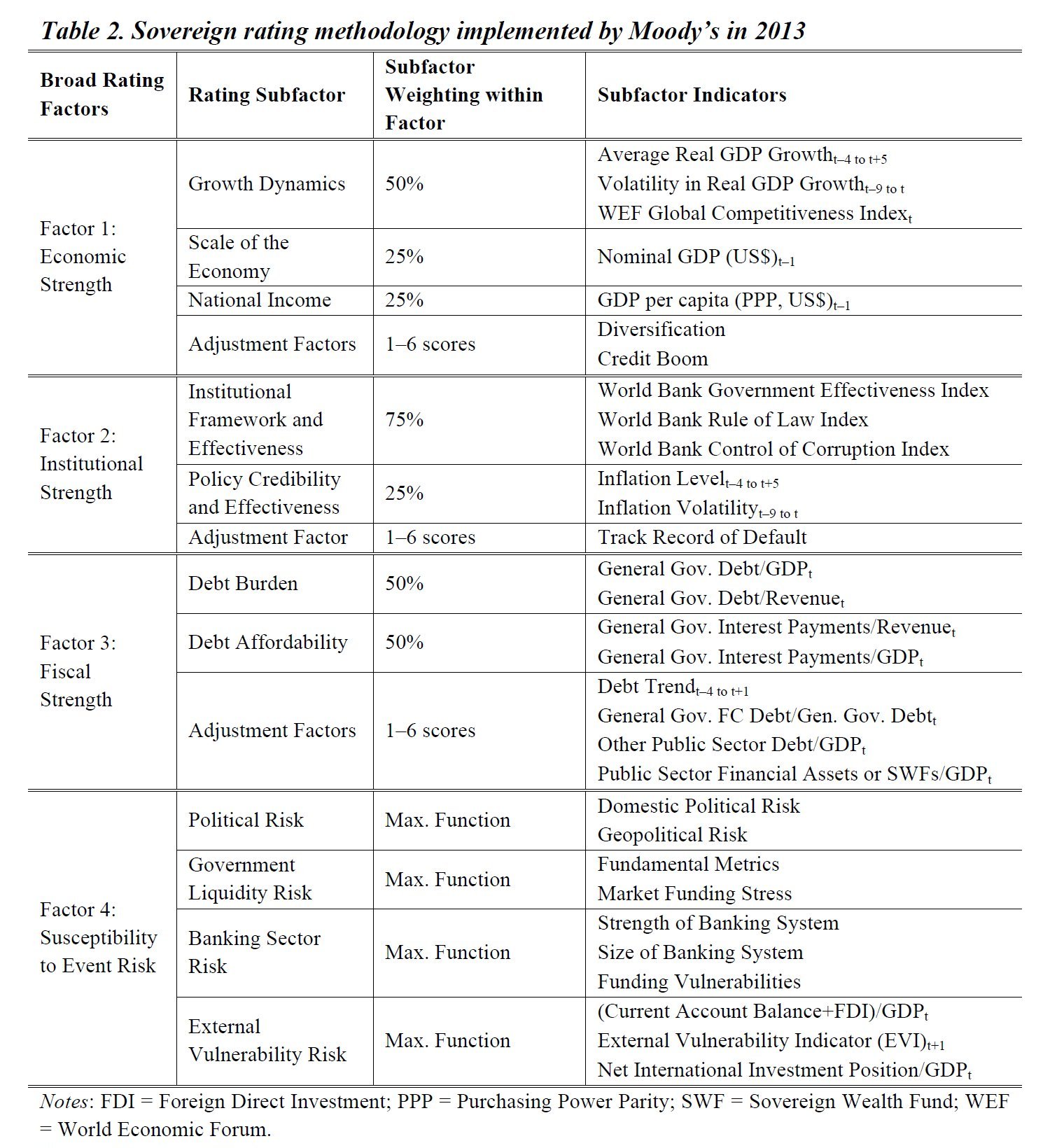 As an example of such back-testing, Gaillard (2014b) estimates Iceland’s and Greece’s ratings for January 2008 and January 2009, respectively. These two high-income countries were the first to request financial assistance (Iceland in October 2008) and to default (Greece in March 2012).

These findings suggest that the new methodology implemented by Moody’s would have performed much better in 2008-2009 than did the one it actually applied (Gaillard 2014a). However, Gaillard (2014b) cannot draw incontrovertible conclusions because all ratings are based in part on subjective judgments (e.g., the insertion of adjustment factors in the new methodology). With regard to Iceland, for example, Moody’s stated in April 2008 that although the government had a low direct debt, contingent liabilities were enormous, the banking sector representing the most burdensome contingent liability. The agency was aware of the Icelandic economy’s fundamental weakness, yet its Aaa rating was maintained until May 2008.

Gaillard, N. (2014a), “How and Why Credit Rating Agencies Missed the Eurozone Debt Crisis”, Capital Markets Law Journal, Vol. 9, No. 2.