The year 2020 certainly was one of most unpleasant year for humanity. For us it was even more challenging to continue our work for transparent and independent credit ratings, since our work is completely based on a voluntary basis.

We are therefore somehow proud that we were able to update not only all SWI credit ratings from all considered countries from last year, but even 5 more for the 2021 release. In total 186 countries received a sovereign credit rating according to the SWI – more than any other credit rating agency in the world. A new all-time record for Wikirating.

The SWI rating methodology is a long-term credit rating model which reflects the credit worthiness of a sovereign territory during the next 3 years. The SWI is based on economic factors, which mainly are obtained from the UN, the Heritage Foundation, Transparency International, the IMF and the World Bank[1][2].

Though the data basis of these sources is quite solid with a long track record, it is obvious that especially for many small and least developed countries the quality of data unfortunately is not optimal. Again, we do not claim that our results for the sovereign credit ratings are the absolute truth but a good way to challenge the results from the traditional rating agencies.

Wikirating has evaluated with the SWI the (long term) credit ratings of 186 sovereign countries (5 more than the previous evaluation period). The validity of these credit ratings should be seen from 2021 to 2023 (3 year time horizon)[3]. Countries, which have received a low credit rating (below B-), have a greater probability to default within this period[4]. 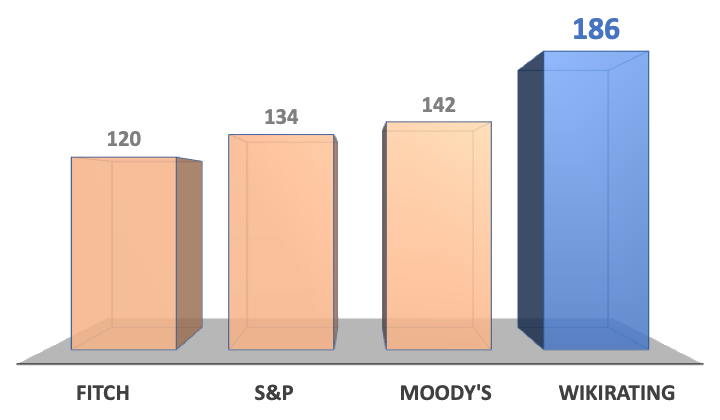 Compared to 2020, the SWI rating distribution shifted to lower ratings (as explained above): 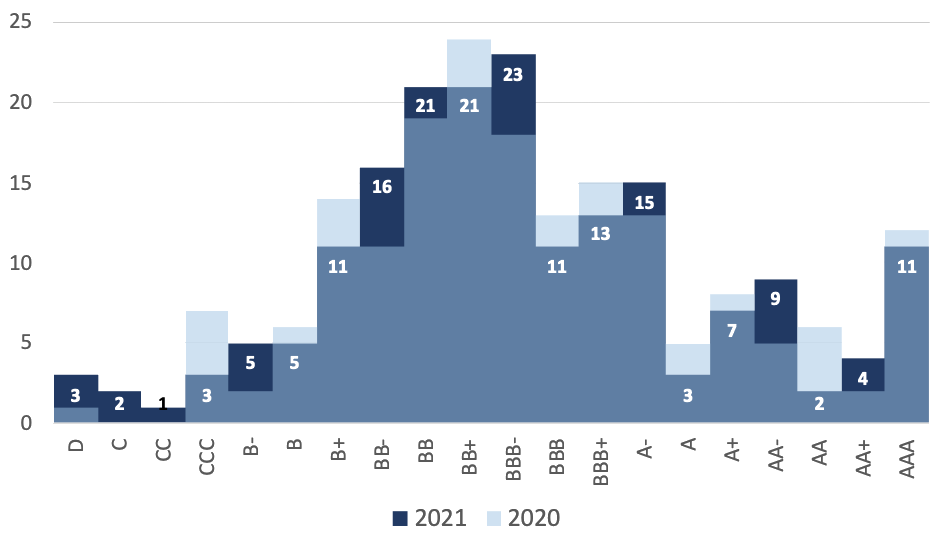 As in 2020, we can estimate a World Credit Rating Index (WCRI), which represents nearly 100% of the global sovereign debt (w/o sub-sovereign debt). To obtain a meaningful result, we weight each SWI rating according to the associated outstanding (central government) debt (Fig. 3). 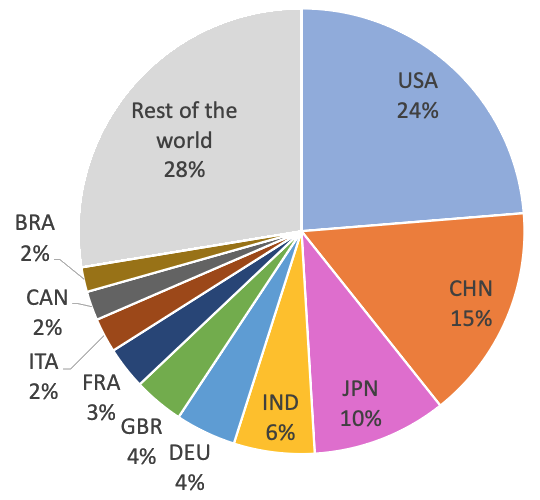 Fig. 3: Contribution to the ‘World Credit Rating Index’ – the ten most indebted countries summarize to about 70% of the index.

We also can calculate Region Credit Rating Indices (RCRI) for Africa, Europe, North/South America, Asia and Oceania. This is somewhat arbitrarily, but we want to demonstrate that the credit rating developments for bigger regions, or similar country types (e.g. low-income vs high-income countries, etc.) can easily be calculated: 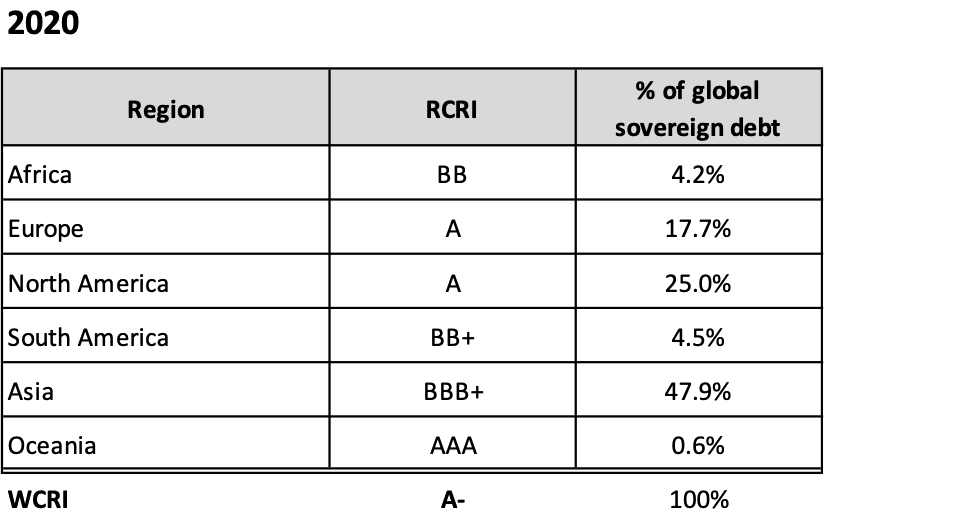 Tab. 1: Aggregated credit ratings for the regions and the world, as of 2020. 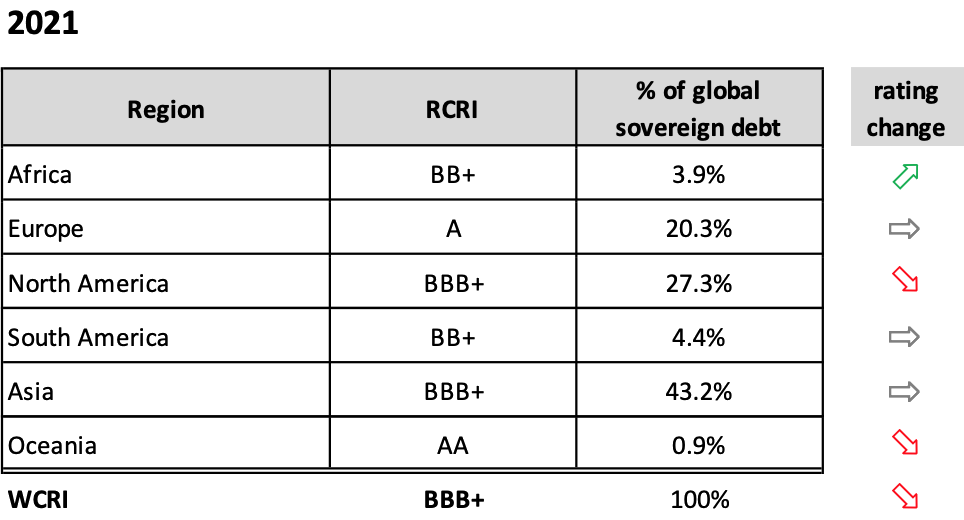 Tab. 2: Aggregated credit ratings for the regions and the world, as of 2021. Interesting enough, only the RCRI for Africa improved.

Based on the SWI, 41 countries – practically all low-income countries – received a credit rating only from Wikirating. 11 of these countries would have an investment grade rating, that is BBB- or better. 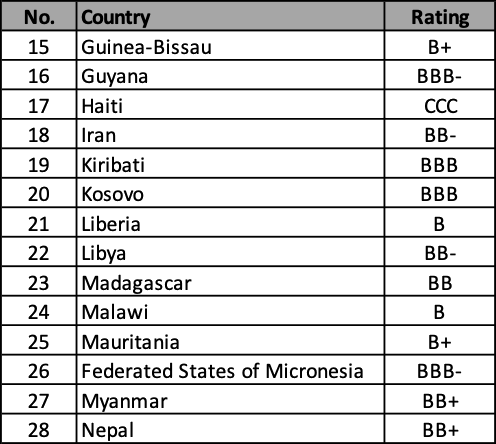 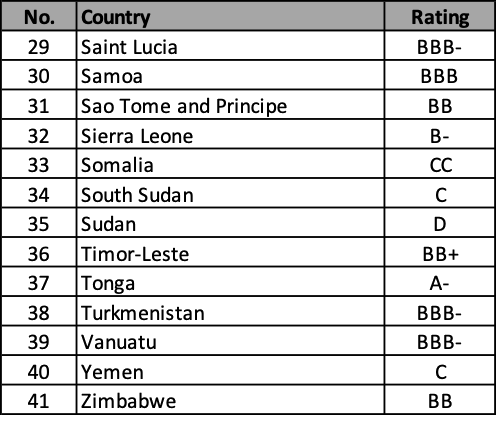 Countries with no credit rating

Though the SWI can cover more countries in the world than any other rating agency, there are still 10 countries which remain unrated – due to missing data:

There are 14 countries, where either the Corruption Perception Index (CPI) or the Economic Freedom Index (EFI) are missing. Therefore, here the final credit rating cannot completely be compared to the other countries, where all scaling factors are available:

Comparison between SWI and “The Big Three”

Like in 2020, we can compare all SWI results with the ones of the big three credit rating agencies (CRAs) combined. With their latest updates, we obtain again a linear correlation: 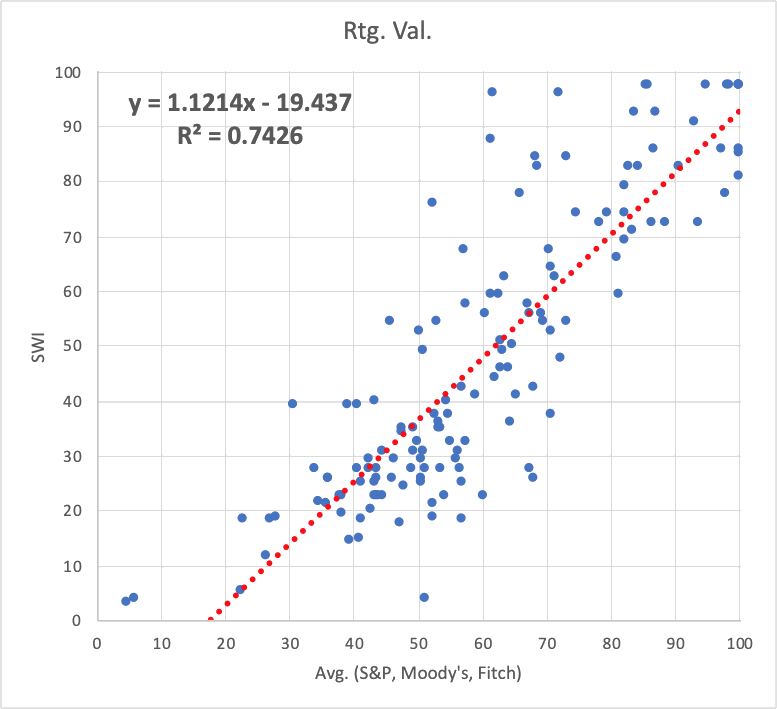 Fig. 4: Correlation between SWI and the average sovereign credit rating values of S&P, Moody’s and Fitch. 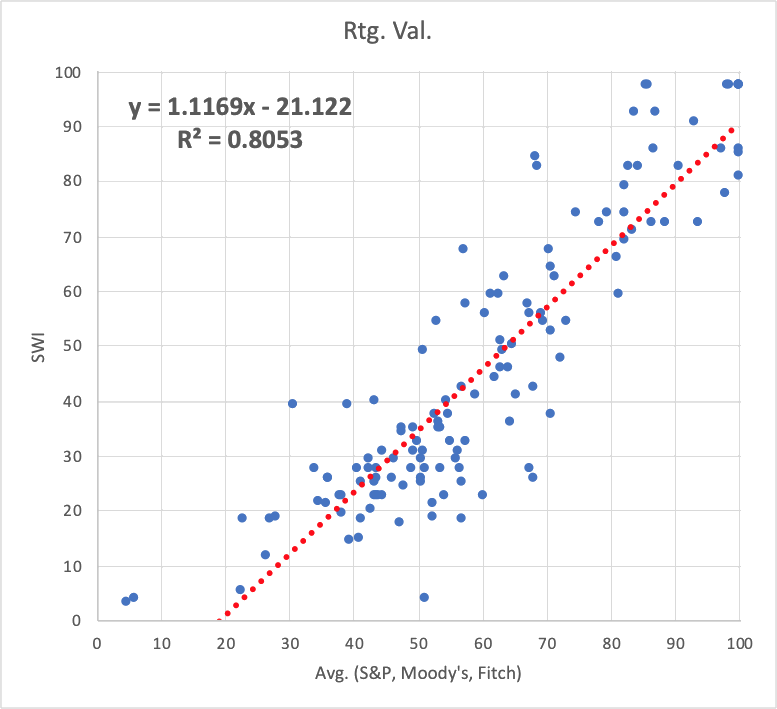 Fig. 5: Correlation between SWI and the average sovereign credit rating values of S&P, Moody’s and Fitch – without the 10 most indebted countries.

We are aware that the SWI is not a perfect sovereign credit rating model. It is quite interesting that we have some noticeable outliers compared to the ‘Big Three’, although the correlation of the SWI results with their results is quite solid as seen before. Similar to the 2020 results, the SWI sovereign credit ratings for most G7 members (Group of Seven) are 6 to 7 notches lower compared to S&P, Moody’s and Fitch, whereas for some low-income countries the opposite is the case (a part of these ‘deviations’ are explainable in that sense, since the SWI considers a more long-term view compared to the rating agencies):

Tab. 3: All countries with more than -5 notches variance between SWI and averaged CRAs ratings.

Tab. 4: All countries with more than +5 notches variance between SWI and averaged CRAs ratings.

With the SWI 186 countries received a sovereign credit rating, 5 more than in 2020. The consequences of the COVID-19 pandemic led to a slight deterioration of many country ratings, especially of advanced economies. The fact that the 2021 results were not even worse is due to the relatively good forecasts by the IMF and the World Bank. 41 countries received only from Wikirating a credit rating, which, in our opinion, can make an important contribution to these countries’ public finances. It should be emphasized that it seems the ‘advanced economies’ biases for their credit ratings did not really improved.

[1] See rating Method “Sovereign Wikirating Index (SWI)”
[2] See blog article “Wikirating updates 181 Sovereign Credit Ratings.” (01.01.2020)
[3] For a few countries there were no estimated data between 2021 and 2023 available for some criteria; instead the latest values have been used, usually between 2017 and 2020.
[4] Three countries (Lebanon, Sudan and Venezuela) received the worst credit rating “D” (obligor is in default), but this does not necessarily mean that this is the case in terms of the usual definition of the common rating agencies. The SWI is a purely analytical methodology, without any judgemental tweaking and according to the results, these countries received the lowest possible score which are mapped to “D”. Within a 3 years time horizon the scenario of a failed payment is therefore highly probable.
[5] Erratum: Due to an erroneous aggregation of the total debt, the 2020 calculated “World Credit Rating” was wrongly estimated one notch lower, that is BBB+.

Disclaimer: The Sovereign Wikirating Index (SWI) and this article are not intended to be a source of financial advise for investments.