Scope Ratings’ methodology for assigning sovereign credit ratings is based on five analytical rating pillars, one of which is “external economic risk”, with a roughly 15% weighting in the overall sovereign rating review process[1]The ‘External Economic Risk’ pillar of the Agency’s sovereign rating methodology holds a 10% weight in the overall rating review process via the sovereign quantitative model, the Core Variable … Continue reading. As this weighting suggests, external risk is highly significant in the prediction of sovereign default during global economic and financial-sector downturns.

Since onset of the Covid-19 crisis in 2020, Lebanon, Argentina and Zambia have each defaulted on their foreign debt. The risk of further credit events in 2022 is high under more inflationary conditions globally as central banks remove stimulus, with the possibility of further rises of global bond yields. Such circumstances are especially challenging for many developing economies. Unlike mature economies, poor and middle-income countries have less-sophisticated domestic financial systems, burdened by the ‘original sin’ of more limited capacity to issue debt in domestic currencies to a significant-enough domestic investor base. As a result, developing countries remain structurally dependent on external credit, posing debt payment risk when foreign funding becomes more expensive.

Close monitoring of external-sector risk is crucial at this juncture in the economic cycle given ups and downs of the recovery from the Covid-19 crisis and likely volatility in global markets as central banks start normalising policies.

In this article, Levon Kameryan[2]Levon Kameryan, Senior Analyst at Scope Ratings GmbH and co-author of Scope’s annual external risk reports, co-wrote this blog. and I present Scope Ratings’ latest annual external vulnerability and resilience risk assessment framework, published today, evaluating countries’ exposure to external-sector risk under current conditions of high uncertainty. We have expanded this year’s study to cover 95 nations from an original 63 in 2018 and 2020. The framework is based upon eight core indicators (Figure 1) divided along two axes: i) external vulnerability; and ii) external resilience.

The framework assumes a minimum-maximum algorithm to determine a score under each of the above eight factors, with this variable-level score ranging from 0.1 (lowest) to 10 (highest). Factor scores are then combined equally weighted to reach axes-level scores of each country under separate vulnerability and resilience axes. A country’s overall score reflects a simple mathematical summation of the two axes-level scores. Source: Scope Ratings GmbH.

The dividing lines between quadrants reflect the median country scores on each of the two (vulnerability and resilience) respective axes across the full 95-country sample. Source: Scope Ratings GmbH.

Figure 3 and Figure 4 display our aggregate external risk scoring, aggregated between the framework’s two axes for each country, against Scope’s current sovereign credit ratings as well as against 5-year CDS. In Figure 3, a relationship between the score and the long-term sovereign credit ratings assigned by Scope is illustrated – although there are outliers such as Turkey’s creditworthiness being rated weaker by Scope than risks implied by even the economy’s poor external-risk metrics. The same may be said for peripheral Europe countries, with nations ranking in the middle of Scope’s external-risk ranks but receiving comparatively weaker credit ratings due to vulnerabilities captured under sovereign-rating benchmarks outside of external-sector risk such as high government debt. Figure 4 displays a curvilinear relationship between performance under the external-risk framework and CDS – referencing the importance of close monitoring of external risk in forward-looking appraisal of sovereign default risk. 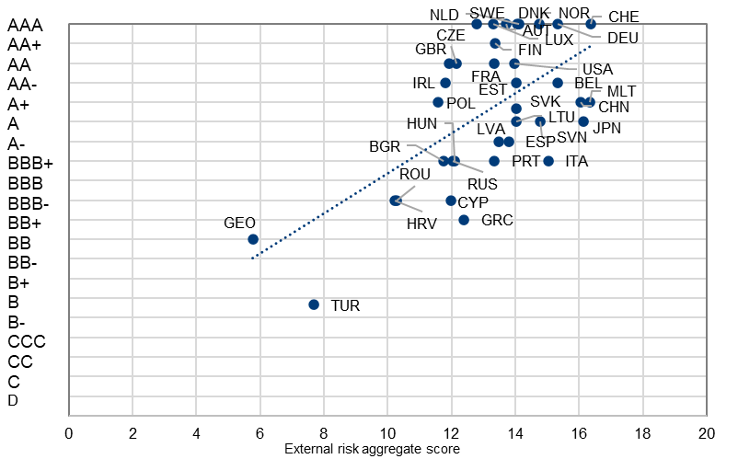 Displayed are the 36 sovereigns that Scope rates publicly (ratings as of 5 November 2021). Source: Scope Ratings GmbH. 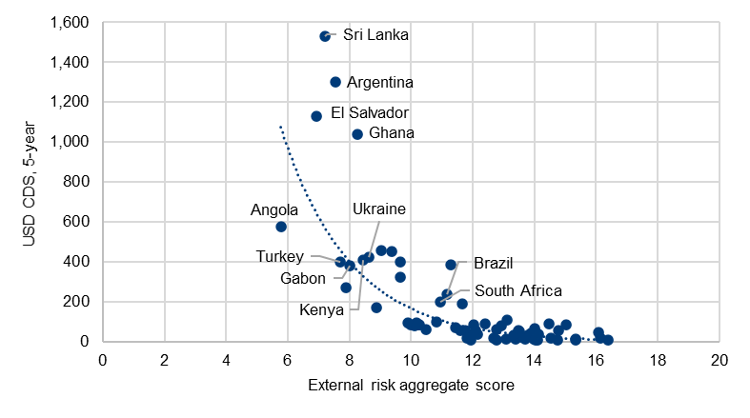 CDS data as of 5 November 2021. All the 95 ranked countries under this report that present the requisite CDS data displayed. Source: Bloomberg, Scope Ratings GmbH.

Dennis Shen is a macroeconomist and a Director in sovereign ratings with Scope Ratings based in Berlin, Germany. Before he joined Scope in 2017, Dennis was a European Economist with Alliance Bernstein in London. Dennis graduated from the MPA in International Development from the London School of Economics in 2013 and completed undergraduate studies at Cornell University, where he graduated from the College of Engineering in 2007.