This column explains how and why sovereign ratings and bond yields failed to anticipate the Eurozone debt crisis. It also argues that, paradoxically, sovereign ratings are now valuable risk indicators because bond yields have become increasingly disconnected from macroeconomic fundamentals since the 2012 shift in ECB monetary policy.

A glance at the rear-view mirror

The average credit rating assigned to the eleven founding members of the Eurozone did not shift to any significant extent between 1 January 1992 and 31 December 1997 (i.e., just before their EMU membership was made official). As soon as credit rating agencies (CRAs) became convinced that the Eurozone would be launched, they began to adjust their ratings upward. From 1 January 1998 through 31 December 2008, Fitch, Moody’s, and S&P announced 28 upgrades versus only seven downgrades (see Table 1). It is noteworthy that Moody’s did not lower any Eurozone sovereign rating during this period.

The revision of Greek fiscal data in October 2009 triggered the Eurozone debt crisis. By the end of December 2009, Greece had been downgraded twice by Fitch and S&P and once by Moody’s. Investors’ mistrust spread to other peripheral countries, which suffered several multi-notch downgrades. Between 1 January 2009 and 31 December 2013, the credit ratings of Italy, Ireland, Portugal, Spain, Greece, and Cyprus were downgraded by (respectively) 5, 8, 9, 9, 11, and 13 notches. Greece restructured its debt in March 2012 and was subsequently upgraded. Cyprus defaulted in June 2013 after a debt exchange. Only four Eurozone members have managed to preserve their rating since they entered the EMU: Estonia, Finland, Germany, and Luxembourg; all of these except Estonia are still rated triple-A by the three CRAs. The average gap between the highest and the lowest rating within the Eurozone widened from about 5 notches on 1 January 2009 to 15 notches on 1 January 2014.

How and why CRAs did so poorly …

The sovereign rating failure – that is, the pro-cyclicality of CRA ratings – stems from three different roots (Gaillard 2014b).

1/ As CRAs became the exclusive gatekeepers of financial markets and thus more powerful than ever, they faced a growing number of requests to refrain from too severe downgrading. This pressure undermined the rating agencies’ credibility and objectivity. Indeed, discerning readers may well have detected a puzzling discrepancy between the comments made by CRAs and the ratings that they issued. In their 2009 reports on Greece, Portugal, and Spain, CRAs analyzed the credit position of the three countries toward the end of justifying their recent downgrades. Yet the comments in these reports were unexpectedly alarming in view of the (relatively) high ratings actually assigned. This discrepancy was most striking in the report sections that presented peer-to-peer comparisons.

2/ CRAs misunderstood the fundamental nature of the EMU and the role of the ECB in the event of a Eurozone member’s solvency crisis. Eurozone membership eliminated exchange rate risk, but CRAs failed to realize the implication: default risk would increase precisely because EMU members could no longer adjust their exchange rate as a means of addressing their external account imbalances and preserving their competitiveness. For instance, the economic convergence (i.e., the catching up with its peers) exhibited by Greece in the 1990s was driven in part by the drachma’s depreciation; this currency declined 31% against the US dollar between January 1994 and January 2001. Subsequently, the euro appreciated 53% against the US dollar between January 2001 and January 2010 while the Turkish lira fell 55%. The risk of default was a major threat to Greece and other peripheral Eurozone economies because Article 125 of the Treaty on the Functioning of the European Union proscribed any bailout for financially distressed countries.

3/ The methodologies employed by CRAs were inadequate to assess sovereign risk. In particular, too much emphasis was placed on GDP per capita – a sticky indicator that fails to capture the productive sector’s true dynamics – and too little on debt sustainability and competitiveness. Rating agencies also underestimated the impact of a weak banking system (e.g., the volume of nonperforming loans and bonds) on a country’s credit position and neglected contagion effects such as those leading to the crisis in Cyprus.

… But not the worst!

That being said, international investors were even more optimistic than CRAs in the 2000s, as evidenced by the evolution of contractual terms in sovereign bonds. With the advent of the EMU, market participants agreed to underwrite, purchase, and hold peripheral Eurozone countries’ bonds whose covenant terms reduced the threat of enforcement against the sovereign issuer. For example, there was a decrease in the frequency of negative pledge clauses accompanied by an increase in the frequency of clauses stipulating local law. These trends were indicative of business and law circles viewing Eurozone membership as a “substitute for creditor protection terms” (Choi et al. 2012).

The overall belief in the convergence of peripheral countries in the 2000s was also reflected in three market indicators: the share of government bonds held by nonresidents, their average term to maturity, and their yields. At this point, it is instructive to compare Germany (the benchmark of the Eurozone), Spain (the country that obtained a triple-A rating in the 2000s before falling to nearly the speculative-grade category), and Greece (the first EMU member to default).

The percentage of German, Greek, and Spanish government bonds held by nonresidents was near 35% in 2000Q1. The share of German sovereign securities held abroad rose steadily to 57% in 2012Q1, whereas the comparable share of Spanish bonds reached a peak of just over 51% in 2007Q1 before declining to 30% in 2012Q1. The percentage of Greek government bonds held by nonresidents soared in the mid-2000s and hit a record high of 76% in 2008Q3; this proportion fell to 56% in 2012Q1 (Andritzky 2012). For Greek and Spanish sovereign bonds, the average term to maturity increased (respectively) from 3.9 years and 5 years in 1998 to 6.2 years and 6 years in 2003, where the latter values are similar to the German average. The evolution of 10-year German, Greek, and Spanish government bond yields during the past 16 years is even more instructive (see Figure 1). The spread between German and Greek bond yields tightened from 330 basis points (bps) in 1998 to fewer than 20 bps in 2003 and 2004 before widening dramatically after 2008. Similarly, the German-Spanish bond spread was near zero during 2003-2006 but their yield curves diverged following 2008. This pattern was also observed for other peripheral countries. 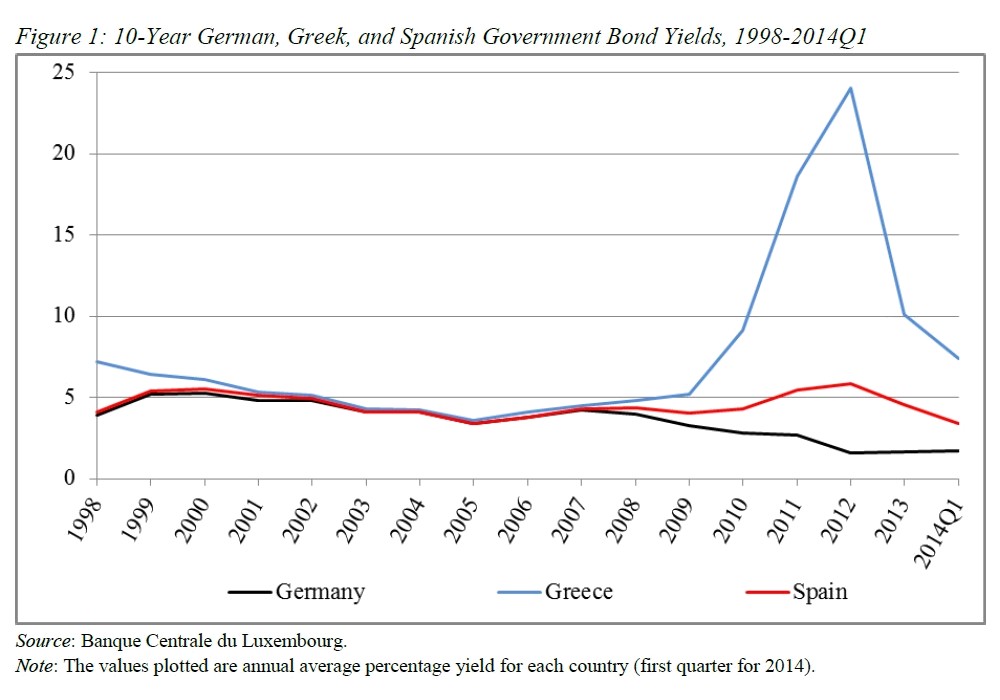 This set of statistics establishes that international investors discriminated even less between Eurozone countries than did CRAs, until 2008, although the former were subsequently more prompt than the latter to modify their sovereign risk perception (see Figure 2). These results support the view that credit ratings were less pro-cyclical than were market-based indicators (Gaillard 2014a). In fact, the findings show that – when risk aversion is extremely low – interest rates are disconnected from macroeconomic fundamentals. It is this phenomenon that enables increasingly risky borrowers to tap financial markets. 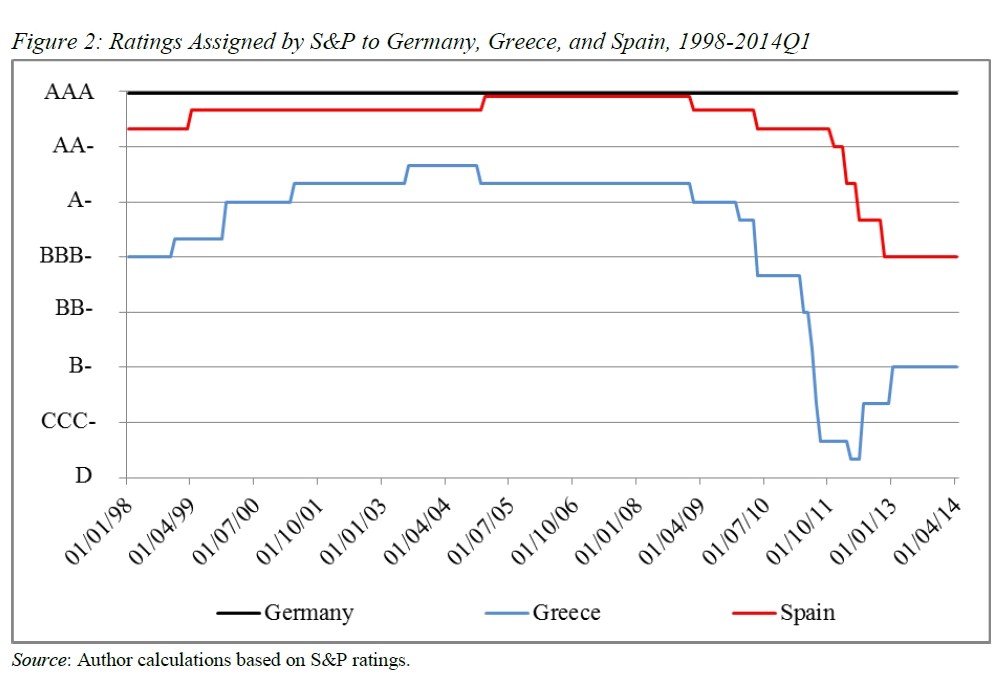 Since the enactment of EU Regulation no. 462/2013 of the European Parliament and of the Council of 21 May 2013, references to CRA ratings have been systematically removed from European regulatory rules. Major CRAs updated their sovereign rating methodologies last year. Although Eurozone sovereign ratings have stabilized (or have been slightly upgraded) since the second half of 2013, they are much lower on average than in 2009. This dynamic contrasts with the case of peripheral sovereign bond yields, which hit historic lows in April 2014. What a paradox when we consider that France, Greece, Italy, Portugal, and Spain all posted record-high ratios of public debt to GDP in 2013!

In short, the current situation confirms that sovereign ratings reflect credit risk exclusively whereas bond yields reflect liquidity risk also. Some countries that benefit from low spreads should bear this difference in mind when implementing their fiscal policy. From this perspective, it is significant that most calls for an even more accommodating ECB monetary policy come from France – the only Eurozone country that is still assigned a negative outlook by Moody’s.

Gaillard, Norbert (2014b), “How and Why Credit Rating Agencies Missed the Eurozone Debt Crisis”, Capital Markets Law Journal, Vol. 9, No. 2.