A couple of years ago, the exclusive club of countries which were rated with AAA (long-term, foreign currency) by all (major) credit rating agencies, was quite broad. Since then the number of perfect rated countries has shrunk quite a bit. On Wikirating you can sort the list of countries by credit rating very easy. By the way, the US has left this club in August 2011 – according to Wikirating’s SWI[1], the US credit rating is A- (stable outlook).

Depending which credit rating agency you want to consider, the “Triple-A Ivy League” becomes smaller or bigger. If you just use S&P, Moody’s and Fitch as the benchmark we have 9 countries which all are rated with AAA – with the remark, that Australia recently has received negative Outlooks from Fitch and S&P (as of July 2020): 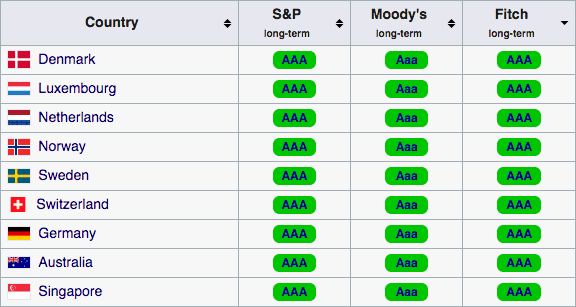 If one adds Scope Ratings, Australia and Singapore are missing – not necessarily because these two countries are “worse” than the other seven in the list, but because Scope Ratings does not rate them:

7 countries which all are rated by the Fitch, Moody’s, Scope Ratings and S&P with AAA (as of July 2020)

What is the view of Wikirating? As in Dorian’s blog article from January already mentioned, we do not claim the authority to create the ‘right’ credit ratings for sovereign nations, but want to offer an alternative view. Based on the Sovereign Wikirating Index, we obtain 12 countries which receive the best rating. Combined with the four aforementioned rating agencies, the list now has only 6 members, kicking Germany out:

6 countries which all are rated by the Fitch, Moody’s, Scope Ratings, S&P and SWI with AAA (as of July 2020)

Remember: The SWI uses the same economic indicators with the same weightings for every country in the same way. No expert or committee judgements are included – just pure numbers.

What is your opinion? Do you think the “top rated” countries are justified?

[1] SWI credit ratings are estimated for the time period 2020-2022 (based on the latest yearly evaluation from 2019-12-31).
[2] Sovereign rating action releases from Scope Ratings GmbH are located at www.scoperatings.com.

3 thoughts on “The last AAA Countries”