Resilience is a physical quantity which can be measured and it reflects the capacity of a system to withstand impacts, shocks and extreme events. Resilience may be measured for all systems or artifacts, such as corporations, asset portfolios, markets or national economies. The computation of resilience is based on the concept and measure of complexity. Complexity is a fundamental physical characteristic of every system that may be found in Nature and quantifies the amount of structured information the system contains. It is measured in bits. High complexity implies high functionality but also an increase of management effort and energy. When taken to extremes, excessive complexity becomes a formidable source of exposure. This is because excessively complex systems are inherently fragile. In fact, every system possesses the so-called critical complexity, in the proximity of which its behaviour is dominated by uncertainty and chaos, making it difficult to comprehend its functioning, to make forecasts and to govern it.

Resilience is independent of performance. A corporation may be profitable but, at the same time, it may lack resilience. This is because it may be highly complex, inducing concentrations of fragility which, in large organizations or systems, may be hidden or invisible for prolonged periods of time. For this reason, countries or corporations which enjoy a good credit rating may still have low a resilience rating. Resilience may also be regarded, to a certain degree, as a reflection of a system’s overall stability.[1]Ontonix S.r.l. and RateABusiness. Retrieved 2013-07-15. [2]J. Marczyk, “A New Theory of Risk and Rating” (ASIN B004CLYICO). Retrieved 2013-07-15.

The complexity of a system having state vector {x} of N components, is defined as a function of Structure and Entropy.

where S represents an N × N adjacency matrix, E is an N × N entropy matrix, ○ is the Hadamard matrix product operator and f is a norm operator. Given that S has no units and entropy is measured in bits the units of C are also bits. Once the entropy matrix and the adjacency matrix have been obtained, one may compute the complexity of a given system as the following matrix norm:

where Emax is the “saturated” entropy matrix. In a similar fashion, the lower bound of complexity, CL, may be computed as CL = ║S ○ Emin║.

The function is illustrated below.

The above stratification applies to corporations, markets, portfolios or national economies or systems thereof. 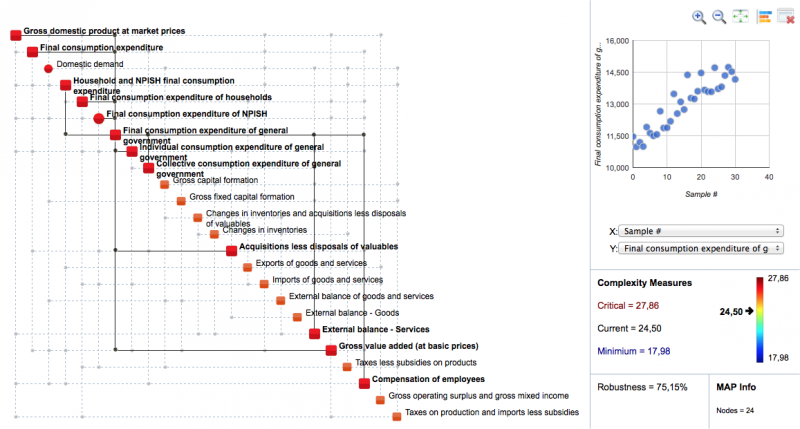 More examples of Business Structure Maps (known also as Complexity Maps) of EU countries can be found on RateABusiness.