Close
Home » Blog » Is the Eurozone Debt Crisis Over? The View from Moody’s

Is the Eurozone Debt Crisis Over? The View from Moody’s

Regulation (EU) no. 462/2013 of the European Parliament and of the Council of 21 May 2013 requires credit rating agencies to publish a calendar of their sovereign and subsovereign rating changes made on or after 1 January 2014.

On 31 December 2013, Moody’s announced three dates for the release of information about its credit rating actions vis-à-vis every issuer. So far, the agency has disclosed the first of its three 2014 credit rating actions for 14 of the 18 European Monetary Union (EMU) countries; see Table 1. 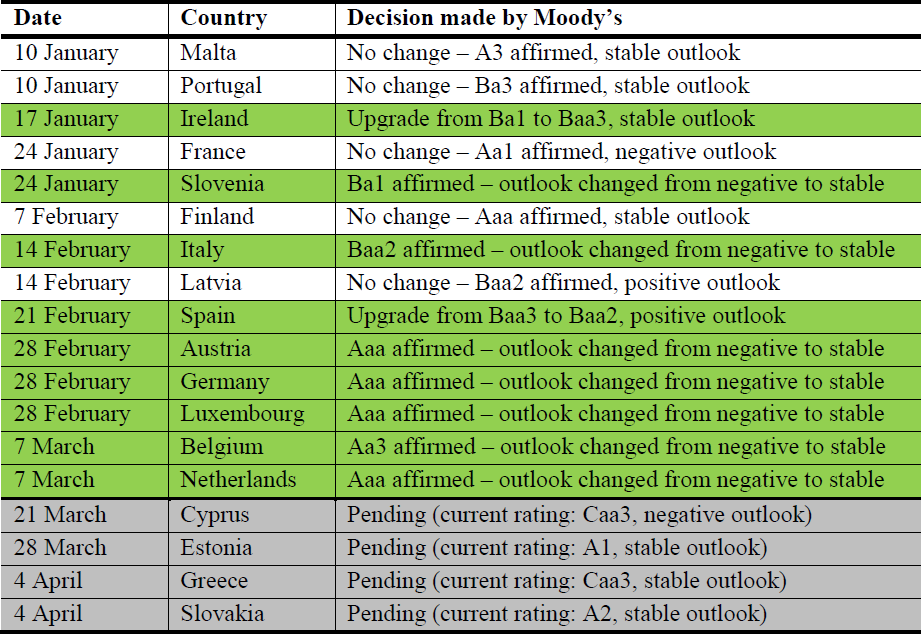 We observe that, since 1 January 2014, Moody’s has taken nine positive, five neutral, and no negative credit rating actions regarding EMU members. The positive rating actions were based on the perceived diminished risks that a Eurozone government’s balance sheet would be affected by further collective support to peripheral countries and also on the relative progress made with respect to fiscal consolidation. This optimism is in stark contrast to Moody’s past opinions. After eschewing downgrades until 2009 – an approach that lowered its accuracy ratios (Gaillard 2011, Gaillard 2014) – Moody’s refrained from upgrading any EMU members until November 2013. In that month, the rating of Greece was raised from C to Caa3. The agency also published a report stating that “ongoing reforms in the euro area to address structural imbalances and institutional weaknesses [would] reduce contagion risks and support investor confidence” (Moody’s 2013). The recent credit rating actions of Moody’s are thus in line with those conclusions.

As of 9 March 2014, only two Eurozone countries were still assigned a negative outlook by Moody’s: Cyprus and France. The former country defaulted in June 2013; however, its rating will be revised on 21 March, and a change in its outlook from negative to stable is likely. Turning now to France, we see that Moody’s revised that country’s rating on 24 January and left its negative outlook unchanged. This decision was driven by “the continued reduction in the competitiveness of the French economy, which risks lowering its long-term growth prospects, as well as the risk of a further deterioration in France’s government financial strength” (Moody’s 2014). In fact, the French government’s difficulty in addressing structural economic and fiscal problems is identified as the major threat to that country’s credit rating. This challenge was recently underscored by the European Commission (2014), which on 5 March placed France under specific monitoring because of its excessive macroeconomic imbalances.

Another assessment of France’s credit rating is scheduled for 23 May. A downgrade from Aa1 to Aa2 would not be surprising, especially given that Standard & Poor’s has lowered the country’s rating twice within two years. Yet a downgrade by Moody’s should concern investors and policy makers alike because it would confirm the ongoing and worrisome decoupling of the French and German economies.

previousEntire Financial System Needs Commonsense Review of Derivative Contracts: Let’s Start with ABS
nextGovernment Credit Crisis Over – So Where are the Upgrades